Learn more about our company and our culture.

Build the store of the future: Retail and the cloud

Brick and mortar retail is in trouble. It may seem obvious with stores like Neiman Marcus, JCPenney, Toys R Us, and Sears in bankruptcy or bankrupt already. But what's less obvious and what too few in retail have acted upon is the depth of the dilemma the industry faces.

To be clear, what retail faces today is the prospect of, first, irrelevance and, eventually, outright extinction. The threat is real and not without precedent. Retail would be wise to heed the lessons learned from the history of newspapers.

As with retail, newspapers have existed for hundreds of years and until recently have been a stable, time-tested method of building wealth and influence. But today, there is little doubt that newspapers are largely insignificant and on the path towards extinction.

For newspapers, this ignoble end started with a rather humble technological oddity, the first web browser, NCSA Mosaic in 1993. Few would have predicted then the industry-shattering consequences to newspapers.

But within 15 years, newspapers were being shuttered in droves or selling for a tenth of their previous value, as internet startups like craigslist, Facebook and Twitter eroded their most profitable businesses by stealing eyeballs and thus advertisers.

The mistake newspapers made was largely ignoring the internet or only tepidly testing the waters. Newspapers were slow to invest in new technologies that would enable them to compete in a brave new era. By the time they realized what was happening, it was too late.

Retail faces the exact same threat and is repeating the exact same mistakes. This time, it is the internet’s child, the cloud, that is causing the disruption, and retailers ignore the cloud to their own peril. For traditional retail, their only salvation is, in effect, to fight fire with fire and quickly embrace, invest in and adopt cloud technologies. This article shows how.

At the same time, traditional retail has certain strengths that can be leveraged, including: 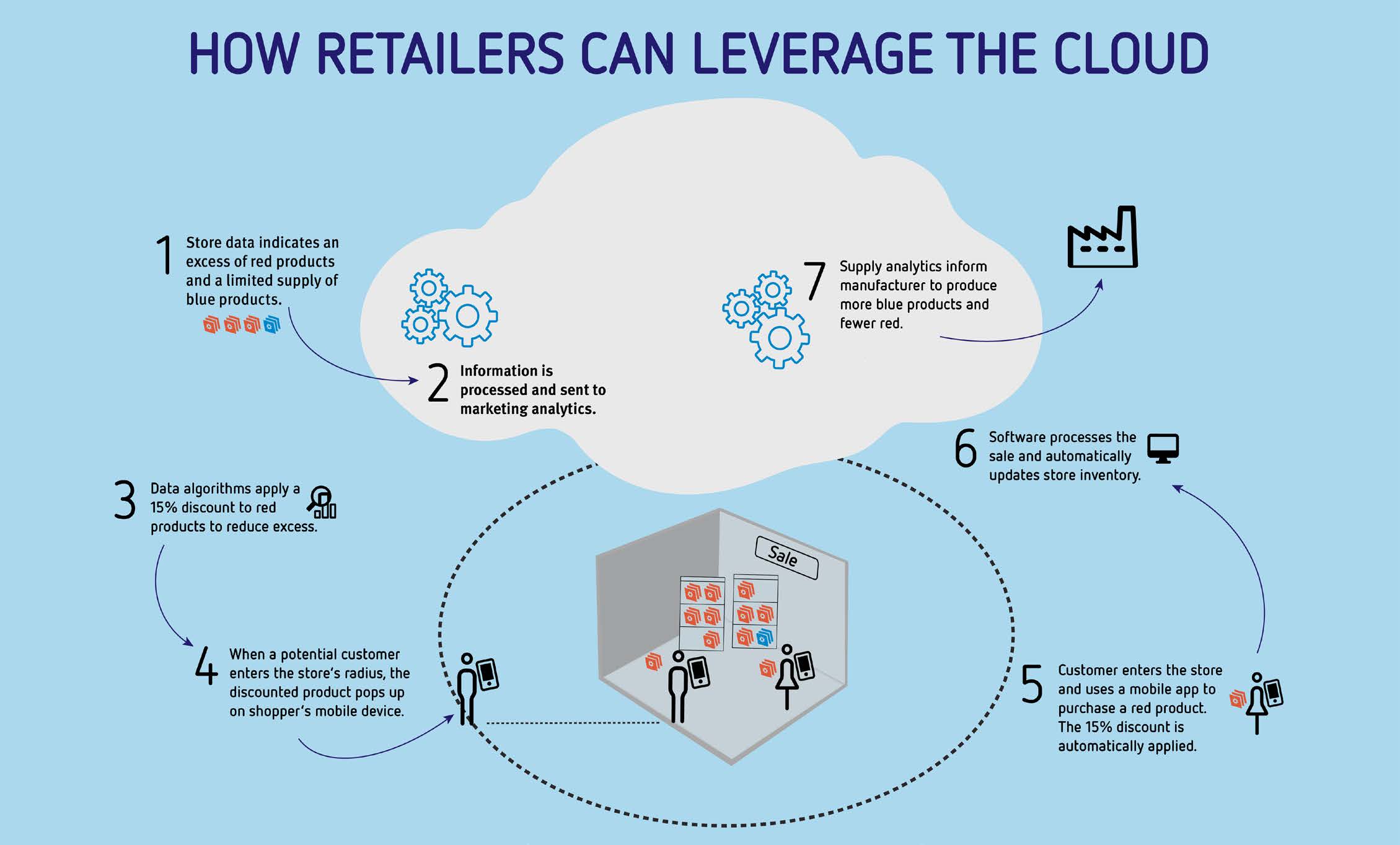 The store of the future

Retail must go far beyond simply having a subsidiary, inferior online presence. This is essentially all that newspapers did to react, and it’s obvious how well that turned out.

Instead, in order to survive and thrive, retailers must quickly invest in cloud technologies to evolve and adapt their businesses to envision a physical retail store of the future.

Imagine, if you will, a retail store of the future like the one illustrated above. As a potential customer nears the store within a mile or so, he or she is notified of a flash sale via phone. Intrigued, the individual stops by the store, interacts with the product, and then can purchase the product simply by opening up a mobile application and taking a picture of it. The customer then walks out the door.

This is the store of the future, and in order to build it, retailers need three components:

The first step in building such a store is to develop an intuitive, immersive mobile application that can be used to purchase products. Once built, the retailer now has the ability to retire traditional point-of-sale systems, providing huge benefits, including:

While initially the mobile application may simply make purchases from the retailer’s e-commerce portal, the retailer can phase in in-store purchasing simply by accounting for store inventory.

This can be entirely automated through geofencing, a location-based service that triggers a response when a device enters the virtual perimeter – for example, providing real-time inventory data for all stores, information that can be leveraged to drive flash sales on overstocked products or dynamically increase the price of popular items.

The mobile application becomes an extension of the retailer’s brand and store that the customer always carries with them, allowing retailers the opportunity to learn about their customers and build loyalty in a way that is impossible otherwise.

Through standard phone technologies like GPS, the retailer is aware of the customer’s proximity to their store, allowing marketing efforts to be maximized at the point that a potential customer is most likely to buy.

These cloud services will collect internet of things (IoT) data from mobile devices and from in-store sensors to help drive more efficient, effective behavior for the retailer and influence potential customers to buy.

Finally, retailers must also ensure that they have a solid data strategy. There must be methods for not only ingesting and processing this increased, high- velocity data, but also in leveraging the information and converting it into knowledge in real time.

Traditional retailers typically do not know what happened within any particular store until the next business day after point-of-sale systems have uploaded their data and overnight batch processes have loaded the data into data warehouses for reporting purposes.

The store of the future requires: 1) an entirely different way of thinking about data and 2) changes to business processes and decision making that correspond with the increased velocity at which data flows into the organization.

Retailers have two simple choices. Either address these factors now or join the ranks of other organizations who fought a brave fight, but still perished.